Sleep and Body Weight – Are They Related? 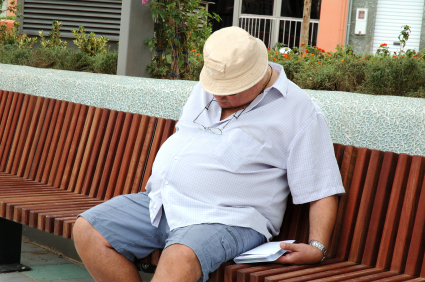 Americans are in a continuous trend of diminishing sleep, now averaging less than 6.7 hours of sleep nightly. We are also more overweight than ever. Can linkages between sleep and weight gain be found?

New research suggests that women who sleep less time are more favored to gain weight. A Columbia University study of over 68,000 middle-aged women followed forward for 16 years revealed that the women who slept 5 hours or less weighed 5.4 pounds more than those who slept 7 hours or more. Interestingly, the women who slept fewer hours were not necessarily bigger eaters, nor did they exercise less. How is it possible that less sleep meant more weight gain?

Some researchers believe that sleep deprivation is linked to weight gain by compromising the hormonal status of the body. Insufficient sleep lowers the body’s sensitivity to insulin, needed in normal blood sugar metabolism. Poorer sleep quality, leading to insulin resistance, can cause an inability to utilize the body energy sources, so they are stored as fat.

People with sleep apnea (inability to breathe during sleep) have another form of sleep deprivation because the poorer quality of their sleep — with unrealized wakenings from not breathing— lessens the value of the sleep. Persons with apnea are inclined to be overweight, though not necessarily. Having untreated sleep apnea creates its own weight-gaining tendencies. This is related to a second hormonal influence known as leptin, a hormone that binds in the hypothalamic satiety center and suppresses appetite. Insufficient or poor quality sleep blocks the effects of leptin, which results in our hunger not being easily satisfied. Interestingly, many persons with untreated sleep apnea find themselves going to the kitchen in the middle of the night for food if the sleep apnea awakens them.

One can be caught in a bind of having poor quality and quantity of sleep, leading to easier weight gain which in turn leads to more likelihood of getting sleep apnea which further enhances weight gain.

Many women who suffer from insomnia, the incidence of which dramatically increases after menopause, are afflicted with a habitual lack of energy after a poor night of sleep. Weight gain is sometimes the inevitable consequence of this lethargy and inability to exercise, another example of the connection between poorer sleep quality and increasing body weight.

Other scientists have recently found a fascinating link between infants’ sleep and future weight gain. Infants who sleep less than 11 hours are much more likely to be overweight as children and adults than infants who sleep 13 hours or more. Then, overweight children and teens are more likely than their normal weight counterparts to have poorer sleep quality associated with sleep apnea, leading to even greater tendencies to gain weight as they enter adulthood.

From the above observations, it appears that improving the quality and quantity of sleep can actually help a person lose (or not gain) weight. Making your sleep right is as important as proper nutrition and getting physical exercise in bringing down your weight.

Ask your physician about how you can make your sleep more satisfactory. Wake up to the need to get a better quality sleep for a healthier, leaner life!